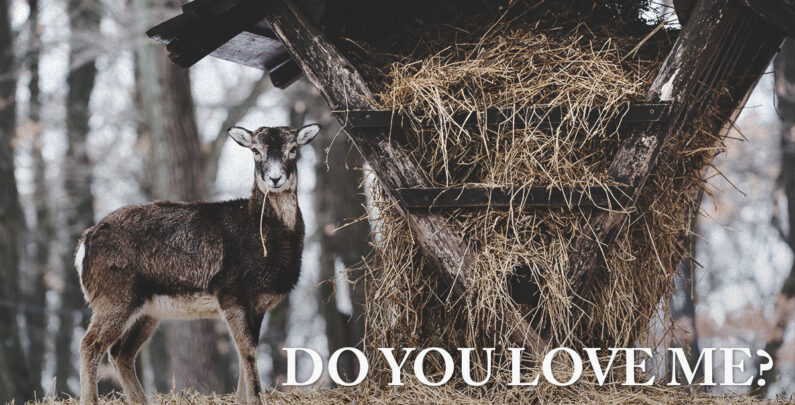 One of the deepest needs we all have is the need to be loved. We all want to loved. There’s a tender and moving scene in the play, Fiddler On The Roof. Tevye and his wife Golda are being forced to move from their home in Russia. One day Tevye comes into the house and asks his wife, “Golda, do you love me?” “Do I what?” “Do you love me?” Golda looks at him and then responds: “Do I love you? With our daughters getting married and this trouble in the town, you’re upset, you’re worn out, go inside, go lie down, maybe it’s indigestion.” Tevye interrupts and asks the question, “Golda, do you love me?” Golda sighs as she looks at him and says, “Do I love you? For 25 years I’ve washed your clothes, cooked your meals, cleaned your house, given you children, milked the cows. After 25 years, why talk of love right now?” Tevye answers by saying, “Golda, the first time I met you was on our wedding day. I was scared, I was shy, I was nervous.” “So was I,” says Golda. “But my father and my mother said we’d learn to love each other, and now I’m asking, “Golda, do you love me?” “Do I love him?” Golda sighs. “For 25 years I’ve lived with him, fought with him, 25 years my bed is his! If that’s not love, what is?” “Then you love me?” Tevye asks. “I suppose I do!” she says. “And I suppose I love you too!” he says. “It doesn’t change a thing, but after 25 years it’s nice to know.” “Do you love me?” That’s the same question Jesus is asking Peter in the closing scene of the Gospel of John. It’s interesting to note that this closing scene is cast in the same spot where the first scenes of the gospel took place — on the shore of the Sea of Galilee. Once again Peter was back to his old occupation. Once again Peter was back to his old way of life. Once again Peter was back in his old fishing boat. But it was not a very exciting return. Peter and the other disciples had spent the entire night fishing, but they had caught nothing. Throughout that long and frustrating night of fishing, the thoughts of Peter keep flying back to another occasion, another time. He was remembering how one had stood on the shore almost three years ago and said to him: “Come, follow me and I will make you a fisher of men.” Dreams of those happy days were dancing in his mind. Suddenly, John was shaking him and pointing toward the shore. Peter looked toward the shore and saw someone and asked, “Who is it?” “Can’t you see?” cried John. “It’s the Lord!” Again, Peter looked toward the shore. He recognized Jesus. He leaped into the water. He went to meet Jesus. Later, when Peter and Jesus are alone, Jesus asks a question that goes to the heart of Peter. He asks: “Simon, son of Jonas, do you love me more than these?”

Three times Jesus asks this question: “Simon, do you love me?” And three times Peter responds by saying: “Yes, Lord, you know I love you.” And three times Jesus commissioned Peter: “Feed my sheep!” Many preachers and scholars, when they get to this point in the biblical story, want to focus on the three questions that Jesus asked, or the three responses of Peter or the challenge of Jesus to “feed my sheep.” Instead of going in that direction, I want to look at the loving way in which Jesus dealt with Peter. Love is something we talk about. Love is something we romanticize about. Love is something we know we need more of. However, by watching Jesus deal with Peter along the shore of the Sea of Galilee, we can get a good clear picture of love in action. In fact, there are a couple of things in particular that we can learn from Jesus in this story about love.

One thing we can learn from the example of Jesus is that love is caring. As Peter found himself alone with Jesus by the Sea of Galilee, I imagine there was an awkward silence. After all, Peter was probably feeling guilty about denying Jesus when he was warming himself by the fire at Caiaphas’ house. Peter was probably trying to figure out how to put the apology into words. But Jesus deals with the awkward situation by asking a very simple question. He looks at Peter and asks: “Simon do you love me?” Jesus could have handled that awkward situation in a very judgmental way. He could have asked, “Simon, are you ashamed of denying me?” He could have said, “Simon, I understand you lied about knowing me.” He could have asked, “Simon, how can I be sure you won’t deny me in the future?” But Jesus knew how Peter was hurting in his heart, so he went right to the heart of the matter by asking: “Simon, do you love me?” By asking this question three times, perhaps this was Jesus’ way of helping Peter overcome his earlier denials. However, one thing’s clear: Jesus dealt very carefully with Peter. Jesus didn’t attempt to further embarrass Peter or to compound his guilt. Instead, he asked a simple little question, a question that was direct, but a question that was tempered with a love that was caring and compassionate.

Abraham Linclon was a great and caring man. There’s something about reading the Gettysburg Address and the Second Inaugural Address which gives you goose bumps. One line in the Second Inaugural reminds you what a caring and compassionate man Lincoln was. He was speaking about the coming end of the War and he said: “With malice toward none; With charity for all.” Lincoln put this idea into practice on the day that news arrived in Washington that the war was over. A crowd gathered at the White House and a military band was playing some festive music. Lincoln stood on the balcony of the White House and spoke. Instead of lashing out against the South, he spoke of the horrors of war being over. He spoke of families getting back together. He spoke of a time of peace. Then he said, “In a few moments I want the band to play and I’m going to tell them what I want them to play.” Of course, the band started getting the “Battle Hymn of The Republic” ready to play. This had been the theme song of the North throughout the Civil War. But Lincoln surprised them, perhaps even shocked them. He stood there and said: “The band will now play the theme song of the people we have called our enemy. They are not our enemies any more! We are one people again. I want the band to play ‘Dixie.’ ” Historians say there was a long, awkward pause. The band didn’t have the music to “Dixie,” but they finally got together and played, “Dixie.” Lincoln knew that the South was not only hurting because of the horrors of the war, but also because of the shame which accompanies defeat. Lincoln was sending a clear signal to the South. Lincoln was telling everyone that there would be no punishment upon the South. Lincoln was saying that the South would be treated with love and compassion.

Another thing we can learn from the example of Jesus is that love is forgiving. Peter must have been hurting on the inside. After all, look what he’d done. He’d denied even knowing Jesus. He’d shamed himself by cursing those who accused him of being a disciple. He’d used language so vile that even the soldiers were shocked. And now, alone with Jesus, by the Sea of Galilee, Peter was looking for a way to prove his love for Jesus. But what could he do? He couldn’t appeal to his record of faithfulness because his record was smeared with shame. He couldn’t appeal to his reputation as a man of his word, for that reputation evaporated the night he denied knowing Jesus on three occasions. He couldn’t appeal to the witness and testimony of his fellow disciples because they knew that when the chips were down, fear turned Peter into a coward. Peter had nothing, absolutely nothing, to prove his love was genuine. But, was Peter really left with nothing? Three times Jesus asked, “Simon, do you love me?” And three times Peter responded: “Lord, you know all things. You know the whole story. You know everything about me. You know I love you.” Peter had nothing left with which to prove his love. And yet, Peter sensed deep within that he didn’t have to prove his love. He knew that he didn’t have to prove his loyalty. He knew that the heart of Jesus would be forgiving for his shortcomings. That’s the way the love of Jesus is — it’s forgiving. Forgiveness didn’t take away Peter’s memory of his denial — he would carry that memory with him to his grave. The forgiveness of Jesus simply re-established the old relationship and assured Peter he was still loved. That’s the way of Jesus’ love — it’s forgiving. In spite of the sin in our lives, in spite of the wrong we do, in spite of the guilt and shame we bring on ourselves, the love of Jesus is a love that is forgiving.

In a novel, a woman is in the hospital with a terminal illness. Her life has been lived on the wild side. Her life has been as bad and as despicable as they come. Now, she’s dying. A priest, a friend for many years, is in the room with her and she asks, “Am I dying?” “Yes,” the priest said. “Does he love me?” the woman asked. “Your husband?” the priest asked. “No,” she said. “You know who I’m talking about. Does God love me?” The priest said, “Yes, God loves you!” “I find that hard to believe,” the woman said. “You know the kind of life I’ve lived. How can you say that God still loves me?” The priest smiled at her question and said, “I’m telling you that no matter what you’ve done, God still loves you.” Then the priest began reading one of the beautiful prayers in the Last Rites of the Catholic Church. He read the prayer which says: “God loves you and God accepts you. Your sins are forgiven; you belong to God; You are now with God.”

him, his love forgives us and accepts us because we belong to him.

Loving God, the meaning and nature of your great love for us is revealed in the life and teachings of your Son, Jesus. Help us to know that we are loved by you and to share the same caring and forgiving love in our relationship with others that you show us in Jesus. Amen.