HomeBlogCan You Hear Me Now? 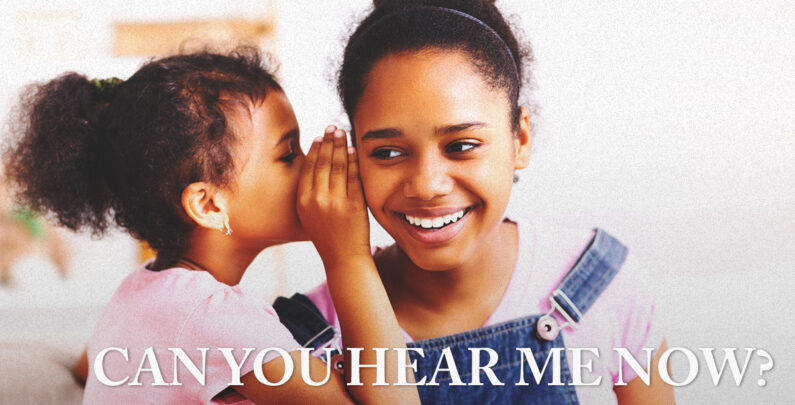 Can You Hear Me Now?

Samuel served the Lord by helping Eli the priest, who was by that time almost blind. In those days, the Lord hardly ever spoke directly to people, and he did not appear to them in dreams very often. But one night, Eli was asleep in his room, and Samuel was sleeping on a mat near the sacred chest in the Lord’s house. They had not been asleep very long when the Lord called out Samuel’s name. “Here I am!” Samuel answered.

Several years ago, one of the cellular companies ran commercials where a guy is carrying around a cell phone and he asks the hearer on the other line, “Can you hear me now?” I sometimes wonder if God feels that way when God tries to communicate with us. God tries and tries and yet we can’t seem to hear. That’s what we find in our Biblical story above. Samuel was just a young boy when he went to live in the temple with the old priest Eli. Samuel’s mother, Hannah, had dedicated her son to God’s service. Samuel had all the energy and enthusiasm of a child. Eli was old and his eyesight had grown dim. Eli’s sons were next in line to be priests, but they weren’t Eli. In fact, they were outright frauds. “The word of the LORD was rare in those days,” the writer of Samuel tells us. Perhaps there was simply no one worthy to hear it. Samuel’s sleeping quarters were in the sanctuary right next to the famed Ark of the Covenant. One night while Eli and his sons were sleeping in the next tent, God called to the young boy, “Samuel! Samuel!” And Samuel was afraid. The sanctuary was a strange place for a young boy. Besides, his mother wasn’t around to comfort him. He was all alone and he heard a strange voice. He was startled. His first thought was it must be Eli. Eli must need something. Who else would be calling him? Samuel got out of bed and raced to Eli’s tent, “Here I am, for you called”, the boy said. But Eli was sound asleep. He hadn’t called Samuel. Eli wondered, had this happened before? Was Samuel prone to nightmares or hearing voices in the night? Eli didn’t like being awakened like this. “I didn’t call,” he told Samuel brusquely, “go back to bed!”Dejectedly Samuel went back to bed. He was sure he heard someone calling his name. After he fell asleep, again he heard the voice calling his name: “Samuel.” Again, he raced to Eli’s tent. This time he was sure someone had called him. Again, Eli sent him back to bed. Then it happened a third time. Again, he rushed to Eli’s side. We’re told that Samuel “did not know the Lord, and the word of the Lord had not yet been revealed to him.” Who was calling him that night? Samuel had no idea. Someone’s calling us but many of us neither hear, nor have any idea who it is. Our text offers three insights when it comes to hearing God.

First of all, God does speak. Throughout the pages of the Bible we find a God who loves us and wants the very best for us. Sometimes God speaks to us directly. Other times, God speaks to us through situations or other persons such as a friend, an acquaintance, a coworker or supervisor. However, He speaks to us, we must respond. Bob Lessnau was raised in a Christian home. By the time he was sixteen, though, Bob had given up trying to please God. As a typical adolescent, he figured he was always offending God with one sin or another. He decided to put religion behind him. One day Bob was working in Wyandotte, Michigan. He decided to eat lunch at the Big Boy Restaurant there. He sat at the counter. No one he knew was in the restaurant. Strangers were sitting on either side of him. As Bob was eating his lunch, he felt a tap on his shoulder. He turned around to see a scholarly-looking man. He didn’t know who this man was. The stranger looked at Bob and said, “I want to see you in church.” Bob was dumbfounded and even embarrassed. “Why me?” he thought to himself. He wasn’t attending church at the time and he admitted, he was “behaving in less than holy ways.” At first, he thought the man was soliciting for his own church, so Bob informed the stranger that he didn’t live in Wyandotte. “I didn’t say what church,” the man replied. “I said I want to see you in church.” Bob swiveled away for just a few seconds, to mull over the strange comment and when he turned back the man was gone. He looked all over the restaurant but couldn’t see the man anywhere. Upon returning home Bob told his wife what had happened. They decided that if God wanted them in church so much that He would go to all this trouble, they ought to give it some thought. Soon Bob and his wife joined a church. God does speak to us. And that brings us to the second insight.
When God speaks are we listening? It took old Eli three times before he realized that it was God who was calling Samuel. You’d think a priest who had devoted most of his life to God’s service would’ve realized sooner who’s on the line. To Eli’s credit, he finally told Samuel that if he heard the voice again to reply, “Speak, Lord, for your servant is listening.” Why would God be calling Samuel? Samuel was a young boy, perhaps as young as seven or eight. Notice that God calls persons of all ages; we’re never too young or too old. Samuel returned to bed. If he heard the voice again, he would respond as Eli had instructed him. God speaks. What prevents us from hearing? Could it be that we aren’t listening? Maybe we need to discipline ourselves to hear the voice of God. An Oklahoma lady named Ruth Andrews had a decision to make. She wasn’t making enough as a substitute teacher to stay in the apartment she had been in for a year. She was unsure what to do. She was considering taking a live-in job caring for an elderly woman. The family hadn’t decided whether or not to hire her. One thing Ruth was certain about, was that she didn’t want to leave her own apartment. She was hoping to find a job so she wouldn’t have to move. Time was short and she was in a panic. One day Ruth was reading her Bible when she found these words from the 46th Psalm, “Be still, and know that I am God!” It was at that moment that she realized she was trusting people and what they said more than she was trusting God. She was acting as if God had been taken by surprise by her situation and might not know what to do. Reading that verse of scripture she realized how foolish she’d been. She saw it was time to calm down so she could hear God speak to her in her need. And that’s exactly what she did. She learned to wait on the Lord. I’d like to say that everything worked out as she had hoped. It didn’t. She had to move in with a relative for a while. Although this wasn’t what she wanted, she felt sure she was where God wanted her to be at the time. Ruth learned a lesson she would never forget. “By stopping to listen for God’s voice,” she says, “I was and am learning to be calmer in the storm.” Perhaps we’ve missed God’s call because we’ve been too busy being in control of our lives. God speaks. Some of us haven’t been listening. This brings us to the final insight from this ancient but well-loved story.

Finally, when God speaks, we better be prepared to change. After he woke up old Eli for the third time, Samuel went back to his bed. Samuel would be called one more time that night. This time when God called: “Samuel! Samuel!” young Samuel popped up saying exactly what Eli instructed him to say, “Speak, for your servant is listening.” And God spoke to Samuel. One reason we might be reluctant to hear God’s call is the changes God might require of us. That night in the Temple, God spoke to young Samuel and gave him some disturbing news. Samuel would become a prophet. Eli was on his way out. God told Samuel, “I’m about to punish his house forever.” God had seen enough of Eli’s sons. Samuel would take Eli’s place. Samuel probably didn’t want to hear this, but God assured him he wouldn’t be alone. We need to understand that if God calls us and we respond, “Here I am,” there might be changes in store for us, too. Peggy Terry was living in Montgomery, Alabama during the bus boycotts of the 1960s. Viewing the turmoil firsthand absolutely changed her life. “It didn’t leave you in the same comfortable spot you were in,” she says. “You had to be either for it or against it.” She remembers seeing white men picking up black women and throwing them into the buses. She recalls seeing Martin Luther King, Jr. beaten up outside the city jail. He came out of jail in all white clothes, she remembers, and about five or six white men began beating him. Something clicked inside of Peggy Terry. Peggy was there with some other white people to watch the turmoil. “I’m so thankful I went down there that day,” she says, “because I might have gone all my life just the way I was.” At the jail she saw people beating up Dr. King who didn’t fight back. “He didn’t fight back, and didn’t cuss like I would have done and he didn’t say anything,” Peggy recalls. “I was just turned upside down.” As she watched what was taking place she felt something stirring inside of her. At that moment she realized that she had to do something. Before night came she too had been arrested and found herself in jail. From that day on she joined the protests for racial justice. “I felt I was doing something.” Peggy says, “I believe that you act on your beliefs.” Like Peggy Terry, Bob Wyandotte, Eli and Samuel God is speaking to us today? But are we listening?

Samuel was unable to go back to sleep that night. He had been awakened four times in one night. Now he had this heavy message to consider. He spent the rest of the night awake. Everything happened just as God told him it would. Much later, when the news came that Eli’s sons had been killed, Eli himself died. In the closing verse of chapter 3 we discover that “All Israel… knew that Samuel was a trustworthy prophet of the Lord.” God speaks to us in many ways. We need to listen for God’s voice. And we need to be prepared to change. We need to become, by the grace of God, new people. God is asking us today, “Can you hear me now?” O God, open our eyes, our ears and our hearts to hear you and respond to Your message. Help us to understand that if we truly hear your voice then we must change, supernaturally by your grace. In Jesus name. Amen.