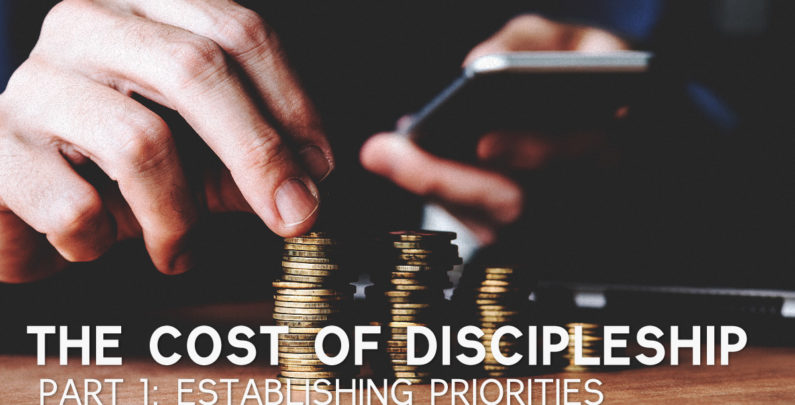 “Large crowds were traveling with Jesus, and turning to them he said: “If anyone comes to me and does not hate father and mother, wife and children, brothers and sisters—yes, even their own life—such a person cannot be my disciple. And whoever does not carry their cross and follow me cannot be my disciple. “Suppose one of you wants to build a tower. Won’t you first sit down and estimate the cost to see if you have enough money to complete it? For if you lay the foundation and are not able to finish it, everyone who sees it will ridicule you, saying, ‘This person began to build and wasn’t able to finish.’ “Or suppose a king is about to go to war against another king. Won’t he first sit down and consider whether he is able with ten thousand men to oppose the one coming against him with twenty thousand? If he is not able, he will send a delegation while the other is still a long way off and will ask for terms of peace. In the same way, those of you who do not give up everything you have cannot be my disciples.”

The mark of a great leader is the demands that leader makes upon his followers. The Italian freedom fighter Garibaldi offered his men only hunger and death to free Italy. Winston Churchill told the British people that he had nothing to offer them but “blood, sweat, toil, and tears” in their fight against their enemies. Jesus spoke of the necessity of total commitment—even to the point of death. He conveyed this in no uncertain terms when he said to his disciples, “You must take up your cross and follow me.” Why was Jesus so harsh? He knew what lay ahead for his followers. According to tradition:

Only John made it through alive, but he was exiled to a small island in the middle of the Mediterranean Sea.

The demands that Jesus makes upon those who would follow him are extreme. Contrary to popular perception, Christianity is not a Sunday morning religion. It is a hungering after God to the point of death if necessary. It shakes our foundations, topples our priorities, pits us against friend and family, and makes us strangers in this world. We sing, “What A Friend We Have in Jesus.” But we must understand that on many occasions he is not our friend but our adversary. We learn in this text that a large crowd was traveling with Jesus. Now, in large crowds you will have many motives. Some, in this crowd, were following because they’d seen Jesus feed a multitude of people and they were waiting to be fed. Some were following because they’d heard of Jesus’ ability to heal and they were waiting for an opportunity to approach him and be healed. Still others were following for the excitement. It’s safe to say that only a few were truly committed to this itinerant preacher’s teaching. Aware of their multiplicity of motives Jesus turned to the crowd and explained to them what true commitment entailed. I’d like to share a three-day series of devotion exploring the cost of discipleship and what being a follower of Jesus requires of us today.

First of all, Jesus made it clear that if we would be his follower, we must first establish our priorities. “Suppose one of you wants to build a tower. Won’t you first sit down and estimate the cost to see if you have enough money to complete it?” -Luke 14:27 Too often we allow things to stand in the way of what is important. And so, hobbies interest us more than our children. A job takes precedent over a marriage. And television displaces family conversations over dinner. We have the best of intentions, but the priorities we know to be so important for life never get carried out in our day to day living. Someone has calculated how a typical life span of 70 years is spent. Listen to these surprising numbers:

When put in these terms, we see how little a priority spiritual matters occupy in our lives. But Jesus is a demanding leader. A thousand times more demanding then we perhaps realize. Jesus said, “So, therefore, whoever of you does not renounce all that he has cannot be my disciple.” Possessions cannot stand between you and the Lord. Jesus went so far as to say, “If you want to be my follower you must love me more than your own father and mother, wife and children, brothers and sisters…” Even something as noble as the love of family, as good and right as that is, cannot stand in the way of commitment to the Kingdom of God. Jesus said, “If any man would come after me let him deny himself and take up his cross and follow me.” Laziness, fear, selfishness, family–nothing can stand between us and the call to discipleship. Jesus Christ demands our obedience. Jesus is not some wishy-washy little fellow coming up to us, hat in hand, hoping to win our favor, saying softly: “Please sir, may I have a word with you? “He comes to us as the Lord of History and makes demands: “Take up you cross and follow me.” He comes to us as one to be obeyed.

O God, who calls us to follow Your Son, Jesus, help us to be honest with ourselves and You by searching our hearts for what are our true priorities. And give us the courage to discard those things and values we have placed before You. In Jesus name. Amen.

Questions for Reflection
Sometimes it’s difficult to determine what are our greatest priorities. Answering these following questions can be revealing.