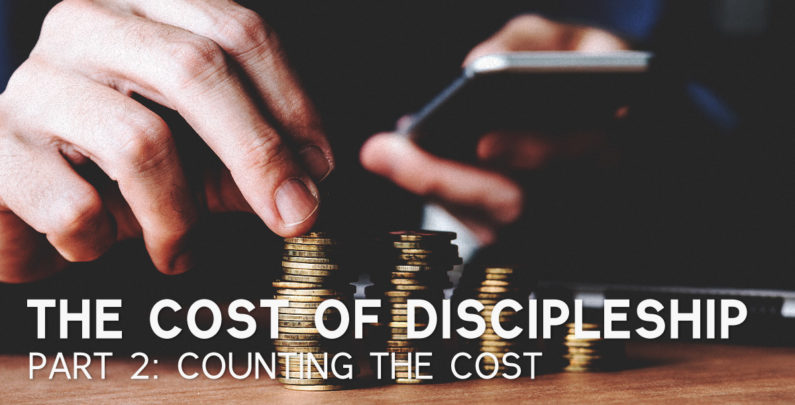 The Cost of Discipleship: Part 2 – Counting the Cost

“Large crowds were traveling with Jesus and turning to them he said: “If anyone comes to me and does not hate father and mother, wife and children, brothers and sisters—yes, even their own life—such a person cannot be my disciple. And whoever does not carry their cross and follow me cannot be my disciple. “Suppose one of you wants to build a tower. Won’t you first sit down and estimate the cost to see if you have enough money to complete it? For if you lay the foundation and are not able to finish it, everyone who sees it will ridicule you, saying, ‘This person began to build and wasn’t able to finish.’ “Or suppose a king is about to go to war against another king. Won’t he first sit down and consider whether he is able with ten thousand men to oppose the one coming against him with twenty thousand? If he is not able, he will send a delegation while the other is still a long way off and will ask for terms of peace. In the same way, those of you who do not give up everything you have cannot be my disciples.”–

Yesterday we discovered that there is a cost or price that accompanies being a follower or disciple of Jesus and that if we are to consider that cost, we must first examine our priorities and estimate where serving Christ fits into our priorities. To become a follower of Jesus we must be prepared to make serving Christ our first priority. But just preparing to make service to Christ a top priority is not enough.

We must secondly count the cost. We must consider what following Jesus requires of us. In our scripture reading from Luke, Jesus illustrated this point. Suppose, Jesus says, you wanted to construct a building. Before you build, what is the first thing you would do? Would you not, he says, first sit down and estimate how much it would cost you to build the building? It’s a rhetorical question and the answer is: “Yes! Yes, I will first estimate the expense.” In today’s language: If it doesn’t add up don’t do it. You don’t want to appear to be a fool by laying the foundation, running out of money, abandoning the project, and becoming the laughingstock of the community. Way back in the latter 1980’s, when I was driving every day from a church I served north of Denton, Texas to drive to SMU in Dallas to attend classes, I daily passed a huge half constructed house on I-35 that someone had begun constructing a few years earlier. The large house was only half built and you could see bricks and building materials lying all around the property. The house had sat vacant like that for several years. Apparently, the builder ran out of money and abandoned the project. Every time I drove by that house, on my way to school, I was reminded of this illustration Jesus gave about the importance of considering the demands and requirements of any project before you start.

When Jesus told this story, he was on his way to Jerusalem. All around him crowds of people followed and thought they were on their way to an empire. However, Jesus knew the path he traveled led to suffering and a cross. What a contrast. I used to think that the crowds in the Bible followed Jesus because he was so wonderful. I later learned the tragic truth. Many followed for terribly shallow reasons. What they and we must do, is sit down and take stock. Do we have the stamina to go the distance even if the finish line is death itself? That’s the heart of the matter. Jesus wants the crowd to answer that question—each and every person must personally respond to that question. We want to make sure that people don’t say of us, He began to build but he was not able to finish. She followed the teacher, but she didn’t learn the lesson. He followed the Lord, but he didn’t carry his cross.

God, Your call to us through Your Son Jesus is to every generation, “Take up your cross and follow me.” Help us to understand the cost that is required of us to follow Your Son, Jesus. Amen.