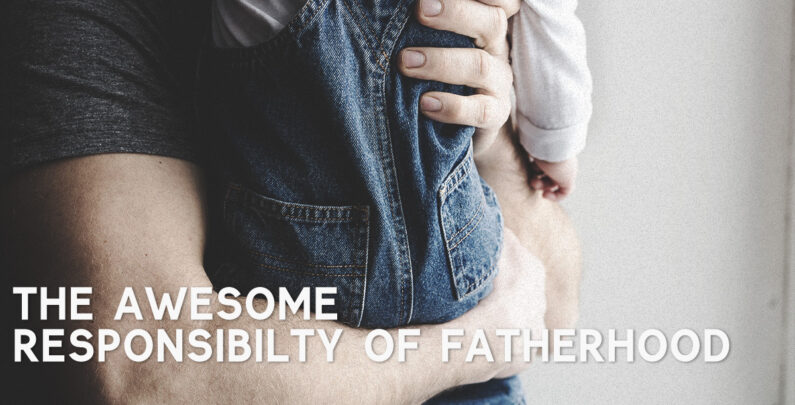 The Awesome Responsibility of Fatherhood

Children, obey your parents in the Lord, for this is right. “Honor your father and mother” (this is the first commandment with a promise), “that it may go well with you and that you may live long in the land.” Fathers, do not provoke your children to anger, but bring them up in the discipline and instruction of the Lord.

This Sunday is Father’s Day, that day of the year that we set aside to honor fathers. Father’s Day’s not what it used to be. Not too long ago, it was a special observance in the year much like Mother’s Day. However, today, Father’s Day seems like an after-thought; more an excuse for department stores to advertise sales on men’s clothing than anything else. Perhaps the reason Father’s Day has fallen into such obscurity is because it seems the same fate has befallen fatherhood. Fatherhood seems to be a forgotten or at least a greatly misunderstood responsibility. Contrary to what some men believe, fatherhood means more than conceiving a child. And yet examining the family unit in our society, we have to wonder. There are more single mother families today than ever before. Tragically, many of these single mother families, live in poverty. This is one of the most troubling problems facing our society today and some sociological studies reveal that the tragedy doesn’t stop with one generation. The sins of the parents tend to be repeated in the children. Where have all the fathers gone? The disappearance of the father in the home is just one aspect of a society that’s gone terribly wrong. The real problem with too many families is the emphasis is placed on wrong values. Money, career, entertainment, personal pleasure often take precedent over spending time with our children. Today, an active, involved father in the home is more important than ever. Why is the presence of a father so important? There are three things we need to consider to better answer this question.

First of all, the most important and awesome responsibility any man can have is raising a child. It’s not work. It’s not earning an income. It’s not paying off the mortgage. It’s not finding self-fulfillment. It’s not even, and some may think this sounds like heresy, serving in the church. The most important task we can have as men is raising our daughters and sons. One of the greatest temptations we men face today is neglecting our families for a career. This is even more insidious for ministers, because we can justify neglecting our families because we’re “doing God’s work.” A good friend of mine who’s a minister, left a large member church to serve a smaller church. I was mystified by his decision. So, one day I asked him why, and he told me a story. He said one evening, while he was about to leave for some church meetings, his five-year-old son said, “Daddy, I hate the church!” The minister asked his son why. “Because it always takes you away from me!”, the little boy replied. Whether we’re ministers, lawyers, doctors, carpenters, teachers or whatever we do, we must be fathers first. Society often suffers a terrible cost from the neglect of our children. At a time when children are looking for authority figures to teach them right from wrong, we find too many homes missing a father.

Second, a father’s influence upon his children cannot be overestimated. Studies have been done to indicate that male role models are vitally important to the self-understanding of children, particularly boys. Boys learn how to behave as males from observing their fathers. Some years ago, South Africa’s game managers had to figure out what to do about the elephant herd at Kruger National Park. The herd was growing well beyond the ability of the park to sustain it. And so they decided to transport some of the herd to a nearby game park. A dozen years later, however, several of the young male elephants, (now teenagers), that had been transported to the game park, began attacking the park’s herd of white rhinos, an endangered species. They used their trunks to throw sticks at the rhinos, chased them over long hours and great distances and stomped to death a tenth of the herd–all for no discernible reason. Park managers decided they had no choice but to kill some of the worst juvenile offenders. They’d killed five of them when someone came up with another idea. They brought in some of the mature male elephants still residing in Kruger Park and hoped that the bigger, stronger males could bring the adolescents under control. To the delight of the park officials, it worked. The big bulls quickly established the natural hierarchy and reduced the violent behavior of the younger bulls. The new discipline, it turned out, was not just a matter of size intimidation. The young bulls actually started following the big daddies around, yielding to their authority and learning from them proper elephant conduct. The assaults on the white rhinos ended abruptly. You see, young males, whether they’re wild animals or human beings, need dads. Those of us who grew up in families in which dad was a positive influence, will quickly agree. It doesn’t always work that way, of course. There are some families in which dads do more harm than good. Yet, for good or ill, fathers have a tremendous influence upon their children.

A third thing we need to consider is that we teach our children far more by example than any of us realizes. What examples do we set for our children? How many of us are like the father in the following story? Joseph had been sent to bed by his mother for using profane language. When his father came home, she sent him upstairs to punish the boy. “I’ll teach that young fellow to swear!”, he roared, and started up the stairs. He tripped on the top step and even his wife held her ears for a few moments. “You’d better come down now,” she called to her husband after the air had cleared somewhat, “he’s had enough for his first lesson.” Or again, one day a young mother and her kindergarten age son were driving down the street. The inquisitive little boy asked, “Mommy, why do the idiots only come out when Daddy drives?” Every word we utter and every deed we do is observed and emulated by our children. It’s a sobering thought to know that what we do today can affect our children’s lives and their children’s lives too, like the ripple effect of a stone thrown in a pond. I want to close with this last illustration. The Roman historian, Pliny, tells of the raising of one of the world’s historic obelisks. Twenty-thousand workmen labored together to raise this huge stone, and there were great risks involved. The king, who was very anxious for the security of the stone, took an unusual step to ensure the stone’s safety. He ordered that the son of the engineer in charge be tied and bound to the top of the stone. The safety of the obelisk meant the safety of the boy. As you might imagine, the day for raising the stone was an anxious one for the engineer. The whole man was in his work. He looked to every detail of his best workmen. He checked and doubled checked. Finally the obelisk was raised to safety and his son to life. As we fathers live our lives, we need to remember that our children are bound to the words we speak and the actions we take, just as that son was bound to that obelisk. And we need to pay every bit as much attention in raising our children, as that engineer did in raising the obelisk. May God help us men to become the kind of mentors and fathers that our children need today. Fatherhood’s an awesome responsibility. We fathers have a tremendous influence on our children and teach our children far more by example than we realize. What kind of examples do we set for our children?

O God, help us as parents, fathers and mothers, to live as Christian models and exemplars for our children. In Jesus name. Amen.