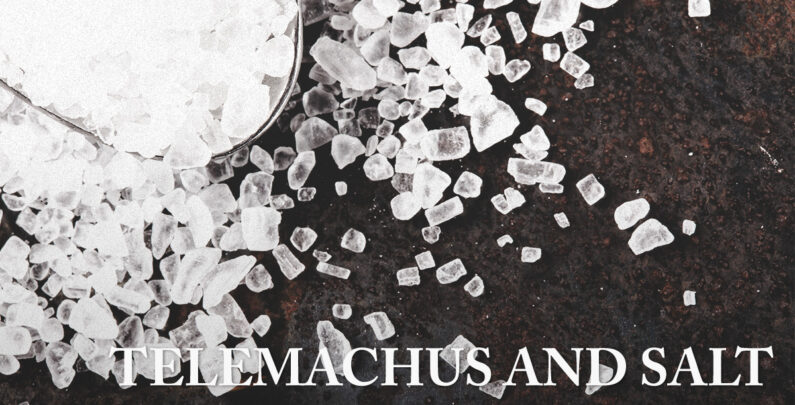 Salt is good for seasoning. But if it loses its flavor, how do you make it salty again? You must have the qualities of salt among yourselves and live in peace with each other.

One person armed with the Gospel of peace can change the world. Telemachus did. According to a legendary tradition, he was a monk who lived in the 5th century. He felt God saying to him, “Go to Rome.” He was in a cloistered monastery, but he put his possessions in a sack and set out for Rome. When he arrived in the city, people were thronging in the streets. He asked why all the excitement and was told that this was the day that the gladiators would be fighting in the coliseum, the day of the games, the circus. He thought to himself, “Four centuries after Christ and they are still killing each other, for enjoyment?” He ran to the coliseum and heard the gladiators saying, “Hail to Caesar, we die for Caesar” and he thought, “this isn’t right.” He jumped over the railing and went out into the middle of the field, got between two gladiators, and tried to stop them. The crowd became enraged and stoned the peacemaker to death. When the Emperor of Rome, Honorius, heard about the monk he declared him a Christian martyr and put an end to the games. Legend has it that the very last Gladiatorial game was the one in which Telemachus died. Jesus said, “…have the qualities of salt among yourselves and live in peace with each other.” Sometimes it seems we have gladiatorial games going on inside the church, inside our homes, and at work. The games have been going on for as long as we can remember! Who will be a Telemachus? Who will be the monk who jumps into the arena, sacrifices himself, and brings peace? Peace can be made but it sometimes comes at a heavy price

You see, we must be at peace with one another; we must try to bring peace into the lives of others; and, we must be at peace with God. Have the qualities of salt among yourselves, Jesus said. Have salt. Sodium is an extremely active element found naturally only in combined form; it always links itself to another element. Chlorine, on the other hand, is a poisonous gas that can stand by itself. Chlorine is what gives bleach its offensive odor. When sodium and chlorine are combined, the result is sodium chloride. What is sodium Chloride? Salt. Common table salt. The substance we use to preserve meat and bring out its flavor. The substance we use to add spice to meals. Love and truth can be like sodium and chlorine. Love without truth is flighty, sometimes blind, willing to combine with various doctrines. On the other hand, truth by itself can be offensive, sometimes even poisonous. Spoken without love, it can turn people away from the gospel. This is why Paul advises us to “speak the truth with love” in Ephesians 4:15. Truth must be tempered by love and love must be empowered by truth. When truth and love are combined in an individual or a church, then we have what Jesus called “the salt of the earth,” and we’re able to preserve and bring out the beauty of our faith: a faith that proclaims peace between God and man and peace between you and me.

God of peace, help us to live as your peacemakers in a world filled with strife and to have our words and actions seasoned with the salt of your truth and love in all our relationships. This we ask in the name of Jesus, the Prince of Peace.