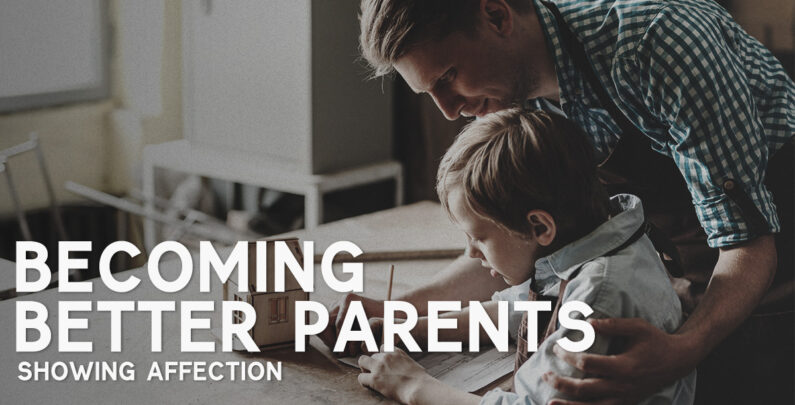 “So if anyone is in Christ, there is a new creation: everything old has passed away; see, everything has become new!”

The second step to good parenting is by showing affection. When the late Channing Pollock, the playwright, was a child, he was taken by his parents to a party. A little girl was present. The children played together until they ran out of ideas, when young Channing said to the girl, “Let’s hide behind this curtain and maybe no one will know we’re here.” “Maybe no one will care,” she replied. That’s about the saddest reply a child can make. “Maybe no one will care.” Even though you may not be big on being affectionately demonstrative it’s essential for parents to communicate love. There was a study undertaken some years ago that relates to this. It was conducted on a group of boys in nursery school. In the first part of the study the boys were given 18 pieces of candy. They were allowed to keep the candy for themselves or, if they chose, they were free to share the candy with their two closest friends. In the second part of the study the boys were asked questions about their fathers. These answers were rated by an outside observer. What came out of this study was a close correlation between boys who were most generous in giving away their candy and those who saw their fathers as the warmest and most affectionate. The boys were not only more generous, but on other tests they also turned out to be more cooperative, sympathetic and kinder than the boys who perceived their father in a less favorable light. It’s superfluous to say how important it is that a child feel loved. Sometimes we fathers forget, though. Boys often aren’t conditioned to express their feelings as freely as women. By not making an intentional effort to communicate our love for our children, we do them a great disservice.

Of course, the ultimate model for showing affection is Jesus. Jesus showed his love for his disciples through his actions by giving his life for them and for all who follow him. He also once said, “No one has greater love than to give up one’s life for one’s friends.” -John 15:13 (CEB) Jesus showed affection and kindness toward all he encountered, healing the sick, giving sight to the blind, hearing to the deaf and raising the dead, even washing the feet of his disciples. As parents, we too can express affection for our children by not only telling them we love them but by also showing them we love them by listening to them when they speak to us, listening to their problems, and helping them through difficulties. Children not only need to hear they are loved. They also need to see that love demonstrated in action. They need to see that they are loved.

Loving God, help us to become the tender and affectionate parents to our children that you are toward us. This we ask in the name of Jesus, who loves us completely and unconditionally. Amen.